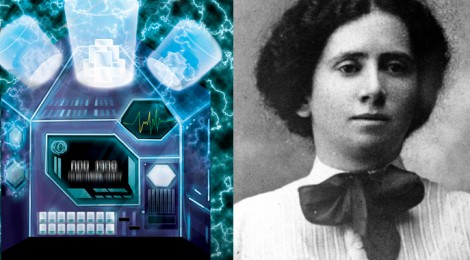 Get ready to put on your reporter’s hat and enter Jewish Time Jump: New York, an interactive story and place-based augmented reality game created to teach players a part of Jewish and American history.

In Jewish Time Jump, available on iPhone and iPad, players work as a reporter for the Jewish Time Jump Gazette and travel back in time to the early 1900s in Greenwich Village, New York, where they investigate key events surrounding the Uprising of 20,000. Developer ConverJent, a resident organization of Clal: The National Jewish Center for Learning and Leadership, launched the game in May.

Rabbi Owen Gottlieb, the director and founder of ConverJent, produced, wrote, and co-designed Jewish Time Jump with co-game designer Jennifer Ash. Games for Change had the chance to ask them both about the creation and inspiration for the game.

What’s your background in making games?
Rabbi Owen Gottlieb: I have been designing games since my childhood in the early ’80s – in elementary school, on the playground, at home, and at camp. My tools ranged from tag-style rules and Nerf toys to home computers. My oldest friend, Chris Alfieri, and I loved digital games and analogue games — both playing and designing. Before we had computers to work with, Chris and I would use markers and paper to devise our own arcade games and illustrated game levels. Chris had introduced me to Dungeons and Dragons and went about designing our own role-playing game based on the original sci-fi mini-series V, complete with full designs of the mothership.

It wasn’t long before Chris and I were designing arcade games using The Games Creator by David and Richard Darling on my new Commodore 128. We designed some arcade games with complex and intricate sprite patterns. Chris would compose the music in MIDI. I still think The Games Creator software was one of the coolest toy and toolkits I have ever used.

In college, many of my closest friends were gamers. They were among the first to play Magic: The Gathering and numerous other strategic board and card games. I was in a gaming community of practice and continue to be a part of that community. I also interned for documentary filmmakers including Ken Burns and made my own documentary and narrative films and videos. Working in documentary was critical for the kind of research, writing, and designing that went into Jewish Time Jump.

Prior to the rabbinate, I worked in internet software development, and then in screen and TV writing. These different fields have given me the opportunity to hone my skills in both technology production and narrative storytelling that I find so valuable to game design.

Through the Education and Jewish studies Ph.D. program at NYU, I have had the privilege of learning with learning scientists like professors Jan Plass, Ricki Goldman, and Chris Hoadley, and also from classmates and colleagues at the CREATE Lab and at the Games for Learning Institute. Professor Plass taught us to incorporate current learning sciences research into our designs. We developed cognitive, affective, and narrative design rationales for our projects.

I designed a number of games in Professor Plass’ course. It was in that class that I met the person who I would eventually invite to join me on ConverJent projects including Jewish Time Jump, Jennifer Ash.

Jennifer Ash: I have been designing and playing games my entire life and have fond early memories of hours at the library playing Museum Madness. As an undergraduate, I dove into learning game design and user research. In terms of game mechanics, I draw from experiences in board, tabletop, and video gaming as well as having GM’ed theatrical-style LARPs. I have interned as a game designer for Club Penguin DS at 1st Playable Productions and as a user experience designer for z/OS at IBM.

For my master’s thesis at NYU, I designed a dungeon crawler to enhance mathematical fluency. That game was part of a larger suite of games as part of the MFDC project. In 2012, I became an IGDA Scholar. Currently, I am a games user researcher at Bungie.

In the process of growing as a designer, I have studied a wide variety of topics from engineering and computer science to 3D modeling and psychology. I find the interdisciplinary nature of game design both challenging and rewarding.

How long has Jewish Time Jump been in development, and what tools were used to make it? How did you come to partner with The Covenant Foundation, who funded the game?
Rabbi Owen Gottlieb: It’s wonderful to be nominated for a Games for Change Award, especially because it all began in the summer of 2010, when I attended a talk by Kurt Squire at my first Games for Change Festival and saw the work that he, Jim Mathews, and David Gagnon were doing with ARIS and in the situated documentary Dow Day. It was at that lecture that I connected with Kurt. I eventually met David Gagnon, a key partner in this project, and got to meet and work with Jim Mathews and the rest of the ARIS team, which includes educational designers Phil Dougherty, Jacob Hanshaw, and Chris Holden.

The team began research and design once the grant was awarded in January 2012. We launched this May (2013), finishing up our grant, and I continue to iterate the game based on data from field play.

Our game required additional functionality in the ARIS system and ways of using ARIS that hadn’t been done before. We wanted to use the haptics of the iPhone, and needed to have access to the vibrate function during some key moments in the game. Sometimes a simple functionality addition allowed us to do all kinds of new designing in the game.

One example was a new ability to hide location markers on the editor side. We have the park densely packed with events and in order to go in and work on them, we often had to hide many of them from the screen. This kind of development in ARIS allowed us to build a much denser game than had ever been built before. We also worked to take advantage of just about every aspect of ARIS, some of which had not been used often, or in the combinations that had not been used. I particular enjoy the way we used certain scripts to animate moments in the game, such as combining Liza Singer’s beautiful illustration work with script tags that allowed us to effectively animate The Chronometer in the game.

How did you choose the events and locations?
Rabbi Owen Gottlieb: In developing the game narrative and mechanics, we did a great deal of research and reading, working with professor Jonathan Krasner, our historical consultant, and I met and corresponded with a number of other historians. Four archival researchers scoured archives for the right photos, articles, fliers, and ephemera.

I knew I wanted the game to be in Washington Square Park and the NYU environs — a great play-space and, following the on-campus nature of Dow Day, an important model and benchmark for us. The Uprising of 20,000 is not well known, has a fascinating conflict, and is a moment of important labor and women’s history in addition to incredible Jewish and immigrant history.

The game has a sprawling narrative, and I had to choose the historic figures and events very carefully in order to develop game mechanics that would lead to learning: What was the work experience like? What did organizers face? What were the perspectives of owners and bosses who themselves worked their way up as immigrants working in sweatshops? Though centering on Jewish characters, what were the intersecting histories of other immigrants?

Professor Annelise Orleck’s research on Jewish women organizers, including Rose Schneiderman, Pauline Newman, and others, was influential. Professor Richard Greenwald’s research includes details of the uprising that gave Ms. Ash and me ideas for some of the game mechanics we developed. Professor Hasia Diner reminded me that Jewish history is always intertwined with the history of other peoples, and so Italian and Irish immigrants play into the story as well as other historic figures like Anne Morgan and Frances Perkins. Professor Ben Jacobs and Jim Mathews provided key pedagogical insights in teaching history. Professor Robert Chazan helped me to wrestle with questions of how to best express multiple perspectives.

Jennifer Ash: Like a good film, games require editing as they progress. We had many factors to take into consideration when creating an augmented reality game for children and their families, such as keeping the locations within certain lines of sight within the park, carefully limiting and warning of road crossings, and understanding the game would need to be completed in a period of time that would be achievable in a supplementary classroom time frame. While these provided constraints, they also forced us to evaluate the truly important mechanics and points of history we wanted to present.

You’ve playtested this game with students (Touch-Screen Time Travel in the Park). What’s been your favorite reaction to the game so far?

Rabbi Owen Gottlieb: One favorite reaction is when I watched a learner demonstrate a cool game move to his rabbi. The learner showed the rabbi how he was going to avoid an attack by strike breakers. The player had figured out how to use a technique available in the game that I hadn’t yet seen used to avoid attacks. It was a total rush to see the player use the game’s own tools to solve a problem in a new way.

What motivates you to make games for social impact?
Rabbi Owen Gottlieb: By asking probing questions about history and considering multiple perspectives, which the study of history demands, I believe we can also ask challenging questions about ethics, dilemmas, and problem solving.

I love learning and culture, and I want to help nurture and encourage love of learning and passion for culture through today’s primary medium – the game and game design. I am particularly interested in my own research and design in the question of promoting cultural futures. How might games help people hand down tradition and cultures while also helping develop new, vibrant cultural expression?

The community of people making games for learning and social impact is inspiring to me — many of us are passionate learners and teachers.

Jennifer Ash: I was always encouraged to explore hobbies and topics that were of interest to me, and this provided me with a sense of curiosity that I want other students to find — subjects that they can be passionate about, but maybe haven’t look at from a positive angle.

Games provide a great foundation in which to build upon to encourage learning about various subjects. They have the ability to often simplify even the most complex systems into something that is challenging and frustrating in a motivational and inspiring manner.

Is there a game for change you wish you had designed or want to design? What is it and why?
Rabbi Owen Gottlieb: I would have loved to have been a part of the team that designed Cosmic Encounter. I love that game. Today, I’m particularly excited about designing games based on Jewish sacred and wisdom literature and the halachic, or Jewish legal literature.

By playing amid those great ethical systems and modeling the many hypothetical cases and the most fair means of deciding cases, we can transmit the treasury of Jewish communal ethics and problem-solving systems. By introducing new generations to the wisdom of our tradition, we can plumb strategies for living better, ever-more caring and fair communities, listening to and hearing multiple perspectives, and seeking a more just society.

What do you think of the current state of video games for social good?
Rabbi Owen Gottlieb: What an exciting time we live in and what an exciting community of educators, artists, engineers, designers, activists, learning scientists, policy makers, visionary foundations this is – all passionate about the engrossing nature of games and the potential games hold for learning and positive change.